A Statement of Some Purpose

In looking for a file just now, I stumbled across this statement of purpose I wrote up for graduate school. I was accepted to Oxford and to University College London that year; and chose UCL; for the same reason that Virginia Woolf might have chosen London over life in the country.

It’s strange, of course: I wonder if this is still the same statement of who I am now. Dani said, when we were having coffee the other day––”Yes, but you seem fairly stable,” meaning that she felt I was rather secure in myself; even if the world is still trying to make up its mind about me; and me about the world. 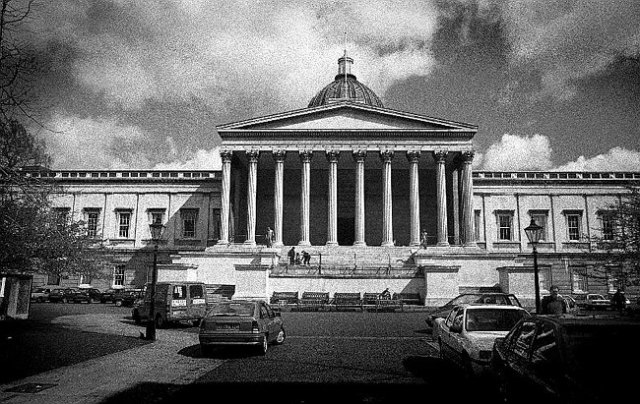 Elizabeth e-mails me to say, “I think I believe in astrology now. I want you to visit this web site and have your birth chart generated,” and so ok, ok––and after entering information such as name, time of birth, date of birth, sex, and so on, a five page so-called description of who I am appears. There is something beautifully intimate about the line that reads, “Rich Russell is eccentric, intelligent and lucid. Complex love life. He is happy in his imaginary world and thus is happy nowhere…”––because I take “his imaginary world” to mean the world of literature and of writing. And how could the real world ever hope to compete with that symbolic dreamscape?

In my Honors Modern Fiction class at Northern Highlands Regional High School (Allendale, NJ), we read Faulkner’s As I Lay Dying in January. I like to wait until everything is a little colder and more desperate before starting upon my favorite book in the course. My high school students, I fear, bright as they are, are, in general, either turned off by Faulkner’s polyphonic prose or forced to merely feign interest on account of my much-professed admiration for the work. There are few students who will defend Addie Bundren in discussion, most finding her selfish, manipulating, and, as one student wrote in a recent paper, “noxious.” Maybe the students who sympathize with her most are also those who understand her well enough to know that for Addie, who thought language was so inadequate, that Addie would not want some prolix declaration of support. So the closest I have come to “rescuing” Addie, during my now three years teaching HMF, is a student’s journal entry admission that he cried after reading the last line of the book: when Anse replaces Addie with the new Mrs. Bundren. And I cried a little too, at his words this time and not Faulkner’s.

I try to explain to my students Addie’s philosophy. “Isn’t it true,” I state, “that, what Addie says of love––if love exists, then there is no reason for us to have a word for it: that the word love would just be ‘a shape to fill a lack’ as she declares? Wouldn’t it be the same for something like happiness––that if we truly were happy we wouldn’t need to provide the term?” And now, as I reflect upon Addie and my students and that line from the birth chart, I’m struck by the possibility that I am content nowhere in life because I am most content in literature and in language: I am more happy in the word happy than I should ever be in a state of happiness.

And so graduate school: my students first suggested the notion to me. I know the classroom is where I want to spend my waking life. I continue to realize that my life isn’t that of your typical Bergen County resident. Lunching at the Applebee’s in Paramus on a recent Saturday afternoon, the restaurant packed with shoppers talking about their cars or their clothes, my friend Amanda and I were having a heated chat concerning Beowulf, and the teaching of it in high school. “We have an obligation to our students. Our students (and, in fact, most people) outside of school might not pick up Beowulf on their own––” and then after pausing a moment to consider this, I conceded, “Well, I mean,––I read it on my own. But that was only because Seamus Heaney had written his new translation.” Amanda smiled and gently mentioned, “You do realize that you’re not most people, Rich. You do realize that you’re not normal, right?”

“What makes you say that?” I asked, still upset over the prospect of a Brit Lit sans Beowulf. “Is it because I spent last Friday night watching three different film versions of Jane Eyre––or because I just joined JASNA [The Jane Austen Society of North America]?”

Amanda smiled. “So what are you going to study?”

I am still a student of twentieth century authors myself. That beautiful synthesis of expectation and despair that prevailed during the first half of the twentieth century––how would I give that up? But as a focus, I should like to explore British novelists between the wars [World War I, World War II]. In many ways, that period seems symptomatic of our current American circumstance––waiting for the next turn of the gyre, as it were.

For in addition to a love of literature and a desire to pursue teaching at the college level, I want to enter graduate school for the same reason Jude Fawley wished to go to Christminster: to be a scholar. I want to return as a full-time student, having now occupied the other side of the teacher’s desk, and work towards my doctorate and a chance to serve the University. I can think of no place I would be as happy.

This entry was posted in This & That. Bookmark the permalink.