The View Since Monday. 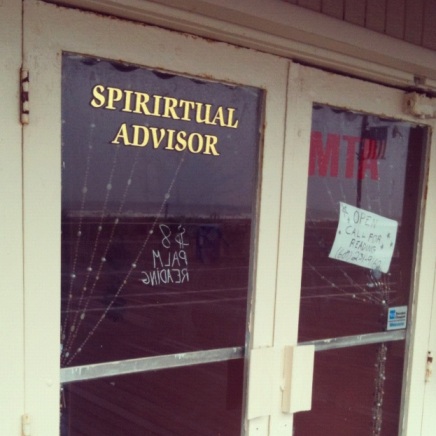 On Monday I had my final conference with Kathy Graber. The first thing she said to me when I entered her office was, “You have a real knack for creative nonfiction,” which was peculiar because I was taking her Poetry Workshop this semester (but I understood what she meant; and it’s true). I asked about MFA programs; would there be a benefit to it? [more graduate school: I already have two master’s degrees, after all] –– and she said, yes, and that I was talented and would have the benefit of being surrounded by other bright, young writers (for you are still young, she said); that together we would burn (me and these young ones); that moths would want to mate with our fire, so effulgent. (She said something along those lines, I’m sure.) So then I rather stumbled out of her office. I saw John Guttschall, who was waiting for his own consultation with Kathy. “I’ll see you at the school,” I said; went out into the night, where there was a constant threat of rain, but no rain.

I reconvened with John and Aubri at Aubri’s old high school, where there was Winters. “The school has gotten bigger and the kids, smaller,” Aubri said. The teenagers were having a slam/open mic, and we were crashing –– giving out copies of our magazine like Jehovah’s Witnesses: Let us tell you about the glory, children! After two hours, I told Aubri I was hungry, and she agreed, and that we should get John.

Fifteen minutes later, at the Applebee’s in Mays Landing, I told John and Aubri about my meeting with Kathy. “And Kathy said,” I said, ” ‘You could do a low-residency MFA,’ and then paused a moment and said, ‘But what do you really have going on here?’ And I knew what she meant. And wasn’t I just saying on Friday that I was beginning to feel restless/reckless? That it might be time for something else now.”

John and I left Aubri with the congealing queso blanco and our share of the check paid and made haste to Stockton.

10:30 at night in the “summer” after the semester has ended and the students evicted from their dorms on the Stockton campus out in sleepy Galloway is hallowed. John and I rushed up to WLFR to be on Elephant Talk and discuss (yes), the magazine and also my story about the beards.

And later I texted my sister: “Everything in moderation. Including moderation.”

And she said, “You should try this seed: Eim, pron. ‘I’m,’ which the book says, the name of this energy is Saraswati, a principle that at a deeper level governs the development and manifestation of spiritual knowledge. It is useful for achieving good education, memory and intelligence, musical skill, and success in spiritual endeavors. Many Himalayan teachers have adopted Saraswati as part of their spiritual name.“

So I’ve gone back to counting beads; drinking tea. At least for now.

This entry was posted in This & That. Bookmark the permalink.